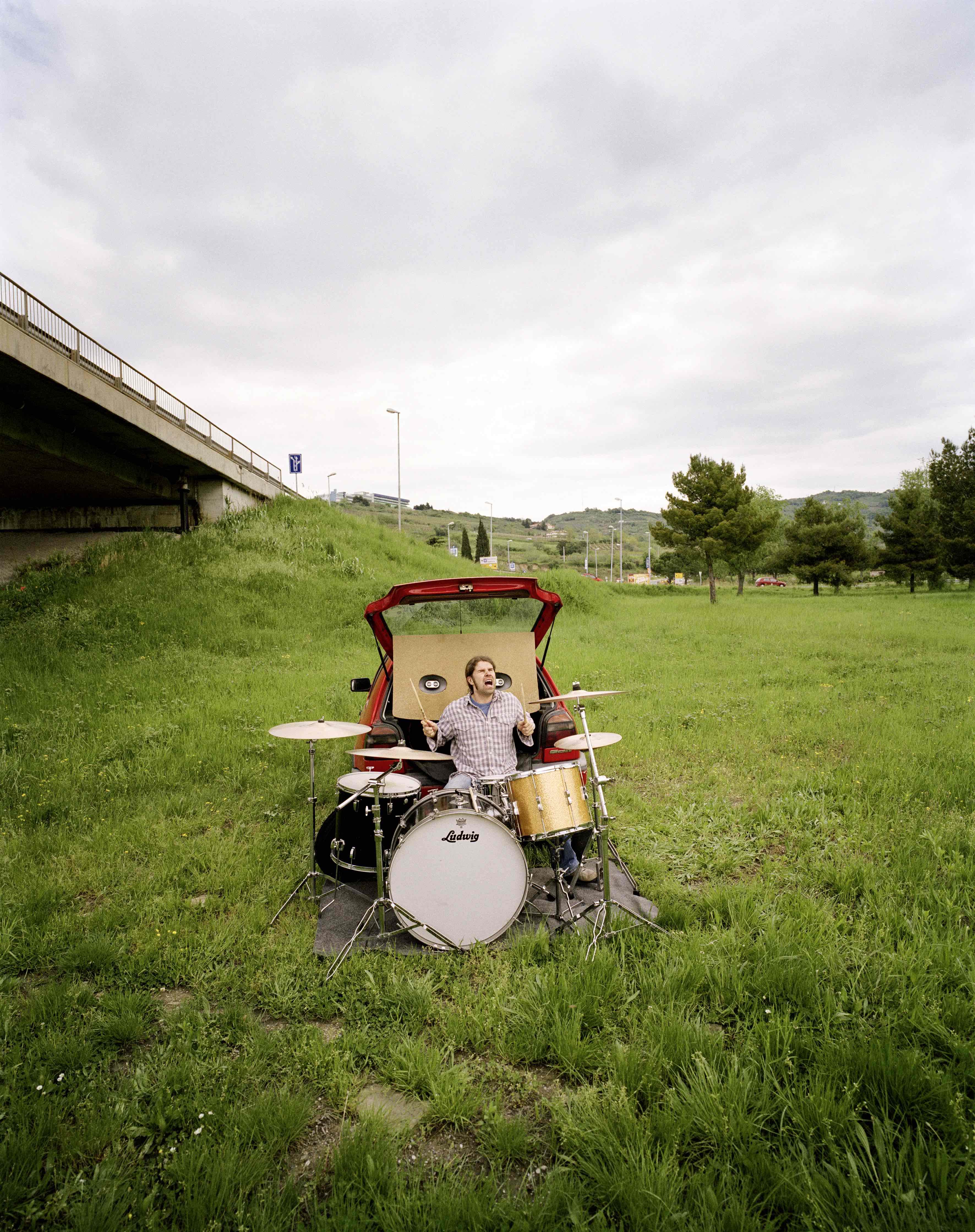 In 2005 Yamandu Roos embarked on the project that became Europeans: one continent, forty countries, 65,000 kilometers. The book appeared a decade later, in 2015. This photograph was taken from the roof of his own car (« the eagle »).

Highways are a « non-place, » to use the French anthropologist Marc Augé’s term. « If a place can be defined as relational, historical and concerned with identity, » he wrote in Non lieux, introduction à une anthropologie de la surmodernité (1992) « then a space which cannot be defined as relational, or historical, or concerned with identity will be a non-place. »

Non-places, in this account, typify a « supermodernity » that « subject[s] the individual consciousness to entirely new experiences and ordeals of solitude. » The book was an inquiry into « what sort of gaze » would be appropriate for such an anthropological void. « The non-place is the opposite of utopia », Augé came to conclude: « it exists, and it does not contain any organic society. »

Changes in language index the drift: the modern « crossroads (where people meet) » gives way to the supermodern « interchange (where nobody crosses anyone else’s path) »; the traveller to the passenger. One novel paradox of the non-place was that « a foreigner lost in a country he does not know (a ‘passing stranger’) can feel at home there only in the anonymity of motorways, service stations, big stores or hotel chains. » Writing in 1992, Augé suggested that « the countries of East Europe retain a measure of exoticism, for the simple reason that they do not yet have all the necessary means to accede to the world-wide consumption space. »

Non-places in turn recast the meaning of place: they consign real places, and history itself, to a spatial and temporal margin. « Main roads no longer pass through towns, but lists of their notable features—and, indeed, a whole commentary—appear on big signboards nearby. In a sense the traveller is absolved of the need to stop or even look. » Real places become « curiosities », analogous to « the ‘quotations’ in a written text. »

Augé’s list of curiosities includes « pineapples from the Ivory Coast; Venice—city of the Doges; the Tangier Kasbah; the site of Alésia. » He also noted, in passing, that the ubiquity of English in non-places is « less a question of the triumph of one language over the others than of the invasion of all languages by a universal vocabulary. » Non-places demand not a particular language, but a « generalized vocabulary », and English was there. « Linguistic enfeeblement (if that is the name we give to the decline of semantic and syntactic competence in average spoken language) is attributable more to this generalization than to subversion of one language by another. »

Quotations from Marc Augé, Non-Places: Introduction to an Anthropology of Supermodernity, translated by John Howe (Verso, 1995).

How could it be that despite decades of rigorous European unification, of open borders and largely adjusted standards of living, a virus was able to kill up to 40 times more people in one country than in another, only a few hundred kilometers away?

€ 0
George Blaustein
No one would have understood both the sentiment and the absurdity more keenly than Marx himself—whose face has adorned real currencies in more countries than anyone else’s, with the possible exception of Elizabeth II.
설탕생쥐
Kim Hyesoon / 김혜순

A poem, plus a note on tongue-like mice and the translation of mice-like tongues.

A poem, plus a note on tongue-like mice and the translation of mice-like tongues