The first man in space was a country boy, a peasant born on a collective farm near the city of Smolensk. The first woman, too, was born a peasant, and raised by a widowed mother who worked at a cotton mill. The first man to walk on the moon was the son of an accountant – not quite peasant stock, but hardly a billionaire.

Yuri Alekseyevich Gagarin, the country boy, became a celebrity after his flight in 1961. He was of such tremendous propaganda value that his handlers tried to keep him from ever flying again. This nearly destroyed him, but his handlers weren’t wrong: Gagarin would die during a test-flight in 1968, a year before the Americans (so we’re told) landed on the moon. Neil Armstrong and Buzz Aldrin brought two commemorative medals to the moon, one honoring Gagarin’s sacrifice, and one for Gagarin’s friend Vladimir Komarov, who perished in the Soyuz-1 spaceflight in 1967.

Many Soviets, meanwhile, perhaps tired of seeing Gagarin’s broad smile, had begun to doubt the man’s qualifications. Was he the best, or just a pretty face? Then there was the name. Gagarin may have been born a peasant, but « Gagarin » was ostentatiously Russian, even aristocratic (the princely Gagarins had emigrated after 1917; those who remained had been repressed). Gagarin’s cosmonautical successors were pretty Russian, too. Soviet spaceships took off from a base in Kazakhstan, but their pilots were raised on Russian soil. The Soviet Union was supposedly a union of equals, but a popular rhyme satirized the very Russian make-up of the cosmonaut corps:

It’s good that Iu. Gagarin
Is no Jew or Tatar
Not a Tajik or an Uzbek
But a real Soviet person!

The cosmonaut corps’ Slavicness appeared like faded road signs on the highway to utopia: easy to miss if you were not looking, but obvious for those paying attention. In Chingiz Aitmatov’s A Day Lasts Longer than a Hundred Years (1980), a Kazakh sees a launch, wonders if « one of our local lads » was at the controls, and longs to meet him. « That would be something! »

In the brilliant and bizarre sci-fi spoof Kin-dza-dza (1986), from the Georgian filmmaker Giorgiy Daneliya, a Georgian student and Russian construction foreman find themselves transported to a distant planet that has undergone some sort of apocalypse; a fierce hierarchy persists among the survivors, though outwardly everybody is drab in the same steam-punk way. Oh, and they can all read minds, so a native scolds the young student: « stop thinking about how you’re the first Georgian in space! » (They can also speak Russian.) 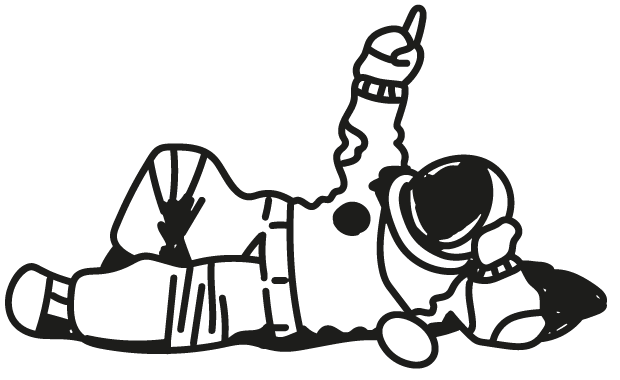 A friend of mine likes to say that the moon landing was real, but dumb. The Russian writer Dmitry Pelevin suggested that it was fake, but ingenious. In the novel Omon Ra; or, the Life of Insects (1992), written as the USSR was collapsing, a young man (Omon Kerzhanov, call-name Ra) pursues his dream of becoming a cosmonaut. Halfway through his training, he learns that the Soviet moon program is a hairbrained scheme to make up for the fact that the Americans had put the first man on the moon: The Soviets would put the first robot on the moon, demonstrating their technological superiority. « Imagine a simple laborer from some small country, » Omon’s mentor explains, « let’s say in central Africa…and he sees that the Americans have landed on the moon and we…you get it now? » The battle for the hearts and minds of the Third World was not yet lost. But the Soviets couldn’t really send a robot, so they hatched a plot to put a secret human behind the controls. The catch is that Omon will have to kill himself after completing his mission. But his gun misfires, and he realizes he’s been piloting his « spacecraft » not on the moon but in an abandoned tunnel of the Moscow metro. A Gordian deception comes undone. (In a more recent novel, Pelevin has Russian intelligence travel back to the late 19th century to convince a minor landowner to test-pilot a primitive airplane, all so the event can be recorded and unearthed in the future, allowing 21st-century Russians to claim the mantle of first flight from the Wright Brothers.)

Both superpowers offered their Third World allies the carrot of firstness. The Americans took a Saudi in 1985: Sultan bin Salman al Saud has the distinction of being the first Muslim, the first Saudi, the first Arab, and the first member of a royal family (Gagarins notwithstanding) to go to space. In 1988, the Soviets took an Afghan, Abdul Ahad Momand, just as the USSR’s ten-year war in Afghanistan was winding down. After the communist regime in Kabul collapsed, Momand fled to Germany, where he found work as an accountant. In 1987, they’d taken a Syrian, Mohammad Faris. Faris became a hero in Syria, but he defected in 2012 after the start of the civil war in that county. He became a refugee and lamented Russian support for the Assad regime.

Only as nationalist mobilizations began to tear the USSR apart did non-Russians within the USSR get their tickets. Musa Munarov, an Azerbaijani pilot, commanded a mission to the Mir space station in 1987. Toktar Aubakirov, a Kazakh, did the same in 1991: a porter who became an electrician and then a regular pilot in the military, and then an elite test-pilot, and finally a cosmonaut. Pravda, the communist party newspaper, crowed: Soviet meritocracy and internationalism were alive and well! But Literaturnaia Gazeta (the newspaper of the writer’s union, a sort of Soviet Review of Books)was more skeptical. Kazakhstan was threatening to leave the union, after all, and to take the city of Baikonur with them; sending the first Kazakh to space would remind the Kazakhs that yes, even if the space program was built on their land and rained metal scraps and toxic waste on crops, animals, and people, hey – at least we could all leave the earth together. Nursultan Nazarbayev, President of a now sovereign (but not yet independent) Kazakhstan, invited the leaders of the non-Russian republics still in the union to witness the When Aubakirov returned to earth, on October 10, 1991, the Soviet Union was as good as dead.

Most cosmonauts were awarded the title « Hero of the Soviet Union » after completing a mission; Aubakirov had already earned that title as a test pilot, so he was awarded the Order of the October Revolution instead, in 1991, the last time that revolutionary anniversary would be celebrated. Thirty years later, a beaming Jeff Bezos got his astronaut wings from the Federal Aviation Administration; the FAA has since announced it will no longer pin medals on those who get to space by buying a ticket.

A poem, plus a note on tongue-like mice and the translation of mice-like tongues.

A poem, plus a note on tongue-like mice and the translation of mice-like tongues

Nazarbayev, along with Mikhail Gorbachev, was among the few political leaders still hoping to keep the union together that autumn. Nazarbayev had been considered for the post of vice-president; he would have been the first Kazakh to be a heartbeat away from leading the USSR. He lost out to a Russian, Gennady Yanaev, who joined a conspiracy against Gorbachev in August 1991, ensuring that Gorbachev would be not just the first Soviet president but the last Soviet leader.