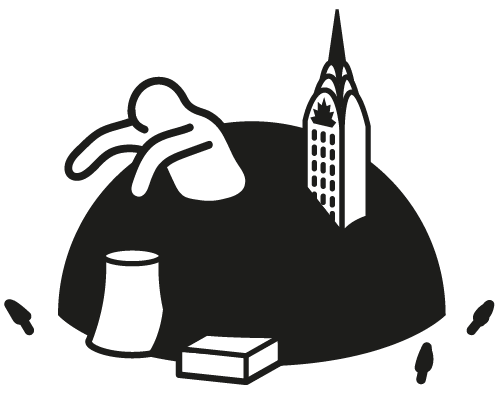 Western stock markets responded euphorically to the onset of the SARS-CoV-2 epidemic. On February 12, 2020, Dow Jones and Dax reached an all-time high. Five days later, I flew from Munich to New York. Lufthansa gifted me with an upgrade to a moderately filled business class. Those who could afford it had stopped traveling by then.

In New York I was staying with a virologist friend. No sooner had we greeted each other with a hug than Sasha informed me that there was nothing else to talk to him about for the next days but the new coronavirus. Sasha had lived in Kiev when, less than a 100 km away, the Chernobyl nuclear power plant exploded, and he had experienced the fall of the Soviet empire soon after. I knew him as a spirited doomsayer, but what he told me now eclipsed his usual paranoiac-critical speculations: SARS-CoV-2 could not be just a simple virus, but an epiphenomenon of a more powerful, eventually lab-derived pathogen. This would explain why it survived on surfaces for so long. (People in Wuhan had started cooking their cash or exchanging it for new notes.) At worst the disease did not provoke enough antibodies to provide a permanent cure. Or the virus retreated like herpes, only to break out again after a while. Or it mutated so quickly, like influenza, that one could be infected again and again. A vaccine – perhaps only partially effective – might not be available for another two years. Or it could take much longer, as in the case of polio or hepatitis C. Since the outbreak of the first SARS epidemic in 2002, humanity had failed, he said, to work vehemently on a general vaccine against coronaviruses. Pharmaceutical companies had regarded the research as not profitable enough, because such a vaccine would be administered only once or a few times in a lifetime. And the companies were deterred by the risk of costly lawsuits from anti-vaxxers.

On February 19, an exhibition opened at the Guggenheim Museum – Rem Koolhaas’ Countryside – The Future – in which I was involved. Even though there wasn't a single known case of a SARS-CoV-2 infection in town yet, Sasha thought it too dangerous to accompany me. While I merged with a hugging and yelling crowd of more than thousand people from all over the world, Sasha met with a billionaire hedge fund manager to get him to finance a virus research program on the scale of the Manhattan Project. But the billionaire waved him off. So far, he told Sasha, the spread of the new coronavirus in China and Southeast Asia was proving beneficial to the American economy. Even if the virus would spread in the US, it would mainly affect the old and the socially disadvantaged, who were at the mercy of the confines of public transport, lived unhealthily and couldn’t afford proper health care – people who were unimportant, if not a hindrance, to economic development. From the billionaire’s perspective, the pandemic would be more of a spring clean.

After the Guggenheim opening Sasha showed me what it meant to stay safe: He sought refuge in the Hamptons, he hardly left his house, ordered all his groceries online, disinfected them meticulously and dreamt of an occasional virtual kiss. He emailed: « I am sitting on my Peloton bike, suddenly Naomi {Campbell} breaks into the screen and pushes her lips forward like you do when you kiss the forehead of a dead lover. A kiss to stay. I stop biking and press my lips against Naomi’s lip print to hear the sound of her breath and her saying ‘You look great, darling.’ That’s it. Back to Peloton. »

Soon, Sasha started to drill himself for upcoming civil unrest. He built up reserves of food, gas, disinfectants and hazmat suits and bought a new gun. On March 15 he wrote: « Not too many options, as many of the best John Wick-style guns are already sold out and ammunition is limited. Gun shopping web sites and YouTube transpire confidence in ultimate mutual destruction. Two-three more weeks of food shortages plus tanking economy plus disease plus political impotence equals civil violence. Ideal scenario for military dictatorship. » I asked him whether he would train with the gun and whether the neighbors would complain or applaud him. Sasha replied: « I am shooting at targets on the deck. The pistol makes light pop sounds. It does not sound like a real gun. I also have a real gun. Benelli M2 tactical semiautomatic shotgun, 12 gauge, 2 3/4 » cartridges. Can’t use it on the deck. I have decent skills in gun handling that date back to Russia. The new gun is a bit different. Will take time to learn. It has a very strong recoil and needs lots of muscle power. »

No way I could follow Sasha’s protocol – not even for a month. But we were both coping with the pandemic by switching into game mode. While Sasha’s was an advanced doomsday adventure, my game was vintage and basic: Shopping became like Pac-Man, walking on the street like Subway Surfers. Come too close to someone and the game started anew.

Our escapism aside, Sasha started new research related to Sars-CoV2 and I was struck by Europe’s highly varying Covid-19 death rates. While in Italy more than 8 per cent of the knowingly infected people died, in Germany the numbers lingered between 0,2 and 0,3 per cent. How could it be that despite decades of rigorous European unification, of open borders and largely adjusted standards of living, a virus was able to kill up to 40 times more people in one country than in another, only a few hundred kilometers away?

Pollution? Madrid and the north of Italy - centers of the European pandemic with the highest death rates - were characterized by exceptionally high air pollution, particularly nitrogen dioxide. Sasha agreed that environmental causes must be crucial, but he thought that it could be the food: « Mediterranean diet may predispose cells to support virus replication. »

I replied: « Spanish and Italian diets are pretty different. A touristic misconception... just as to think of Italy and not of heavy industries and smog. » But Sasha already had a new idea of what prevented the Germans and also the East Europeans from dying: beer! He wondered if beer would hinder the self-cleansing of the cells while wine would foster it. This self-cleansing was in general very healthy (life expectancy in North Italy was pretty much the highest in Europe, despite the smog) but could also help Sars-CoV2 to replicate.

Should we invest all that we had into breweries? The stock market was down. On March 16, 2020, the Dow Jones dropped by a quarter in one of its biggest crashes of all time. Sasha hadn’t told anyone else about his hypothesis yet. Was this our once-in-a-lifetime chance to get rich? Beer was definitely better for the environment than Bitcoin.

The dream dispersed as soon as I typed « Yearly beer consumption in Europe » into the search bar. Beer consumption in Spain was almost as high as in Germany. And when I looked at the age groups affected most by the pandemic, it all became clear: In Italy and Spain the numbers for old people were particularly high, in Germany they were extremely low. Italians and Spaniards still tend to meet with their parents on a weekly basis – hugging, kissing and shouting – but Germans don’t. It wasn’t the beer, the air or the hospitals that saved the Germans, but their social coldness.

Relics, and the places devoted to their worship, dotted the map of Europe and the Middle East. Saints, like today’s celebrities, were both omnipresent and faraway, once-vulnerable people who became something more than human.