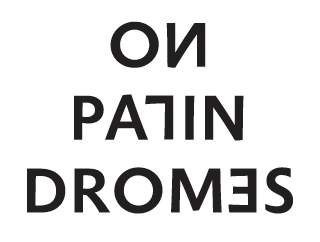 pursuing
you lead me to come to the future

on the way,
falling, yet ascending

passing by,
virtue and darkness

on the way,
who waits for the Pope

lofty as mountains, further as rivers
your kind-heart is as light

« Pursuing » is a combination of puzzle, word game, and chase.

shine as the kind-hearted you
mountains are lofty, rivers are far

darkness and kindness
pass by,

ascending, yet falling
setting out on,

coming to the future, I lead you
demanding 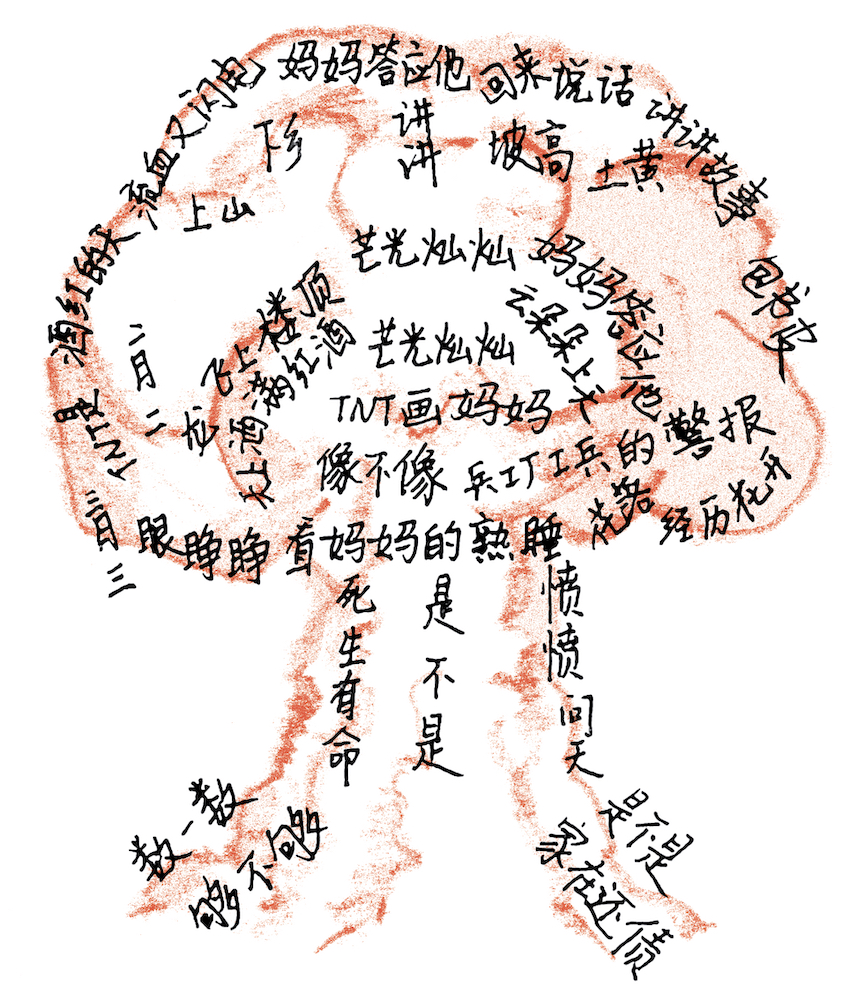 « Stratus » recalls one afternoon in my childhood, when I suddenly found the sky turned red, but not the red of a sunset’s glow.

is it
home is paying the debts
count it
enough or not?

enough or not?
count it
debts are still there at home
is it
life contains living and dead
is it
question the Heaven in anger
blooming flowers experienced withering
sleeping mom
look, open your eyes
third of March
the military engineer at munitions factory
who triggered the alarm bell
does it look like
splendid radiance
mom draws TNT
clouds drifting
wine-red color spilled the sky in full
leather school bag
he promised mom
splendid radiance
fly the dragon on the top floor
second of February
loess
plateau
at the countryside
on the mountain
tell tales
accidents, please elaborate
anyway
he promised mom
lightening flashes and blood flows
sky’s red wine
is TNT
cloud banks
Yu Müller / 翟彧
On palindromes

My poems, in Chinese, can be read in (at least!) two directions. Their meaning is fluid, and depends on the path the reader chooses to read them. Translation to English demands a doubling and an inverting — perhaps an unfolding as much as a translation. I call them palindromes (回文). How I came to that form, from far away, requires some explication.

Not until I read Les deux raisons de la pensée chinoise: Divination et idéographie (2013) by the French sinologist Léon Vandermeersch did I become self-conscious about my own mother tongue. The translated Chinese version appeared in 2017; I had been living in Germany, and had ceased speaking Mandarin Chinese on a daily basis, which allowed me to focus on the written world and to immerse myself, in a different way, in those Chinese characters that I was so familiar with. The distance from the daily utility of what was once the only language I spoke brought a novel estrangement. It kindled both rational analysis and word games.

A younger version of me sat in Chinese philology class, drawing pictographic characters. I was in awe of them, and of their etymologies, which I dutifully learned, like:

for 牛 (niú, meaning ox), for 羊 (yáng, meaning sheep), and for 鹿 (lù, meaning deer). In that old textbook’s pages, the words began to dance in front of my eyes. Later I read the American sinologist David Keightley’s inquiries into the origins of Chinese writing. « All writing », Keightley noted, « depends upon the conventional taking of one thing, the sign, for another, the word. » All writing depends on abstraction; Keightley posed a formative harmony between Chinese logography and « the aesthetics of ancestor worship ». Ancestor worship is itself an abstraction-game: for the dead to be worshippable, after all, they must be abstracted into ancestors.¹

Words have ancestries. Keightley followed dragons and rainbows: from a C-shaped jade « pig-dragon » (zhulong), « found in Hongshan sites in northeast China, dated to about the middle of the fourth millennium BC », to oracle-bone inscriptions from the Late Shang dynasty (c. 1200-1050 BC), in which the dragon-shape had morphed into the sign for « rainbow », « with the same curved back, and… heads at both ends »:

What moves us from mimetic dragon to abstracted rainbow is divination, born of a simultaneous desire for rain and fear of flood: « a dragon-cum-rainbow meant that the much desired rain would be short-lived; the heads at both ends symbolized the dragon’s ability to drink up all the water… and cause drought. » And we inherit « a semantic and phonetic similarity between 虹 *g’ung/ hong, ‘rainbow’ and 龍 *l’iung/long, ‘dragon’ ». (Keightley even reconstructs an earlier word — an ancestor! — « which may be constructed as close to *kliung, which had the basic meaning of ‘arched, vaulted’ », laying the vault of the rainbow over the arch of the dragon. It sounds similar to the character 拱 [gǒng] nowadays, I’d say.)

If every character is an abstracted fusion of sign, scene, and sound, then to learn such a language is to engage in a secondary divination, and to access « a highly sophisticated pleasure in coded, conventionalized, epigrammatic images ». I thought about the onomatopoetic word for « thunder »: lóng lóng shēng (隆隆声). What if it’s the invisible dragon drumming in the sky? I once did wonder whether all ancient Chinese poets had synesthesia.

Vandermeersch, too, found at the root of ancient characters, and therefore of Chinese culture, divination rather than reason, and that was mind-blowing. I had been trained to analyze and teach Chinese language and literature in China. I ended up a Mandarin teacher in Israel and then Germany. Chinese words, in that pedagogical context, could make a certain sense, similar to calling gloves « hand-shoes » in German. But the syntax — another story. Simple and flexible, yet obscure. There are three tenses and no verb conjugation; grammar lies in context. This « simplicity » nourished the language in Chinese ancient poems. Often, a « linear » narration only appeared in ballads, while in other forms of poetry, images and tonal patterns prevailed.

In The Hall of Uselessness (2008), the Belgian-Australian sinologist Simon Leys located the causes of the « imagist character of Chinese poetry » in « two specific features of classical Chinese »: « morphological fluidity (the same word can be a noun or a verb or an adjective, according to the context) » and « syntactic flexibility (rules governing word order are reduced to a bare minimum; sentences can be without a verb; verbs can be without a subject; particles and grammatical trappings are practically non-existent). »

Chinese poetry usually offers readers a series of images without clearly stating who is the narrator, or where the poet stands. A Chinese regular poem (lǜ shī), with its parallel couplets, can thus be read in various ways. According to Leys, « the interplay of the parallelisms enables us not only to read the lines vertically but also to read them across. » In the poem, that is to say, there is no obvious order for the cicadas or the pond.² Forwards or backwards, clockwise or counterclockwise. Is this reading? You can read it twice! It is also looking: looking at a poem as if you are looking at a painting, seeing depth through two dimensions.

Leys suggested that « one of the deepest seductions of Chinese culture » was to be found in « this conjuring power with which it vests the Written Word. » I’d add the world of sound, too. A pictographic character like 山 (shān) means mountain and it resembles a mountain; other characters furnish a rhyme. The compound ideograph 看 (meaning « to look at or to see », pronunciation kàn) is composed of a hand on the upper left and an eye on the bottom right. And so the phrase 看山 (kàn shān), « looking at the mountain », if one saturates an image from the abstraction of etymology, would be a person with a hand over their eyes, gazing at the distant peaks.

One time I was sitting in the back of an airplane from Hong Kong to Tel Aviv, reading a Traditional Chinese translation of Nothing to Envy: Real Lives in North Korea (2011). A passenger next to me was surprised that the book’s characters were printed vertically. In Taiwan, Hong Kong and Macau, Traditional Chinese is still printed in columns: you read top-to-bottom, from right-to-left. I was raised in mainland China, which adopted a Western, left-to-right order of text. The different geometries started to nest, or clash, in my mind.

Meanwhile, teaching on a screen meant I saw words in other orders. The ancient (top-to-bottom, right-to-left) and the contemporary (left-to-right) scripts grew tangled. For example, in Chinese, 蜜蜂 means « honeybees » if one reads sinistro-dextrally. But read it from dextro-sinistrally — 蜂蜜 — and you will understand honey (literally « bees’ honey »).

I started to gather these words and later longer phrases. The re-orderable pool eventually grew into palindromes, during a dark time that I was trying to find a way out of. I found out that I myself was the way out. What a palindrome life is!

The shape of « Pursuing » was inspired by The Inferno and the baguenaudier. It’s a combination of puzzle, word game, and chase. « 求索 » as a title would lead most Chinese literature enthusiasts to think about Qūyuán, the pre-Qin intellect (my pal Léon would probably call him a soothsayer) who drowned himself in the Miluo River after being slandered by treacherous officials and misunderstood by his king. Citizens, the legend goes, chased each other into the water to save Qūyuán’s body, feeding zòngzi to the fish so that they’d eat the sticky rice instead of eating the poet. « Long long has been my road and far, far was the journey, » one of his most famous stanzas reads; « I would go up and down to seek my heart’s desire ».¹ I have always connected Qūyuán with Dante: both early paragons of philosophical pursuit who turned themselves into literature; both exiled. Both left lyrical verses to shape us.

« 索 », as a noun, also means rope, and this is what Simon Leys called « morphological fluidity ».

Mark Twain visited Dante’s tomb—the one in Florence, where he isn’t in fact buried. « We were glad to know, » Twain wrote in Innocents Abroad, « that his body was not in it; that the ungrateful city that had exiled him and persecuted him would give much to have it there, but need not hope to ever secure that high honor to herself. » 2021 was the 700th anniversary of Dante’s death, and I too was going « up and down to seek my heart’s desire ». I cannot say that I didn’t consider Qūyuán’s method. Luckily, written words and jigsaw palindromes offered me an outlet. I want readers to treat my palindromes as an exit wound, where the pain can always circle back to the entrance.

My grandfather passed away during the first Covid wave. I had not had much communication with him. Long story. My mother knew him mainly as a tyrant: the most knowledgeable professor educated in China’s National South-West Association University. But for me, he wasn’t a tyrant but a book worm, a complete nerd about pre-Qin classics and literatures. He offered me in-depth explanations of Qūyuán’s « Encountering Sorrow », probably because I was the only one in the family who followed the same path as him. Even in his eighties, he was reading thread-bound books that he had acquired in 1930s. Once, I carefully « helped » him to cut the page. I didn’t know the ancient book-binding practice then, and thought the pages were left uncut by mistake.

« Stratus » recalls one afternoon in my childhood, when I suddenly found the sky turned red, but not the red of a sunset’s glow. I lived in Tàiyuán, the capital city of the coal-rich Shānxī province. The city was surrounded by military weapons factories that report directly to the ministry of Ordnance Industry. Residents were once proud workers, until they were made redundant in the late 1990s. TNT and other explosives were researched and developed in the factories, and accidents occasionally happened. Rumor had it that a childhood friend’s mother died in an explosion. Nothing was revealed; I could only speculate, so the palindrome tells the tale in two perspectives. The poem is about childhood memory; explosions and uncut pages are also memories.

It wasn’t the beer
Ingo Niermann

How could it be that despite decades of rigorous European unification, of open borders and largely adjusted standards of living, a virus was able to kill up to 40 times more people in one country than in another, only a few hundred kilometers away?