A trip to Palmyra

The security is surprisingly light – almost nonexistent – we drive directly to a group of battered helicopters, all slightly different shades of khaki… Their forms no longer design-crisp, some carry clearly handmade adjustments. Our pilots shake hands (inscrutable behind aviator glasses), active cigarettes between cracked lips. They keep smoking during the flight. Like early racecar drivers, their helmets are made of soft leather – protection that accentuates the frailty of the human skull, celebrating challenge over security.

In 2010, OMA was invited by a coalition of partners – Aga Khan Trust for Culture, Unesco, Musée du Louvre – to take part in a competition for the Damascus National Museum. It was part of a concerted effort to establish connections with Bashar al-Assad, the ophthalmologist son of Hafez al-Assad, with the hope of a political « rapprochement ». Three months later, the entire effort was cancelled. Civil war was about to break out. 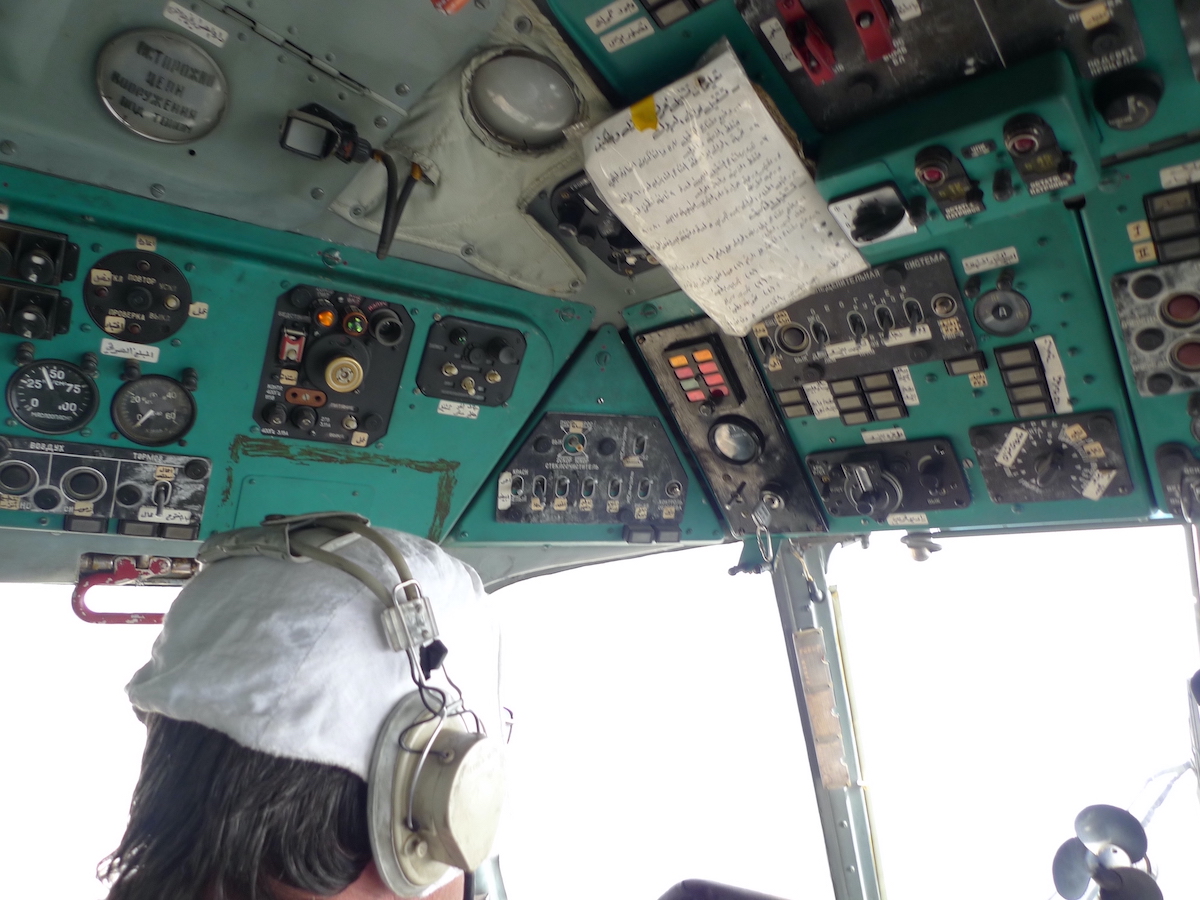 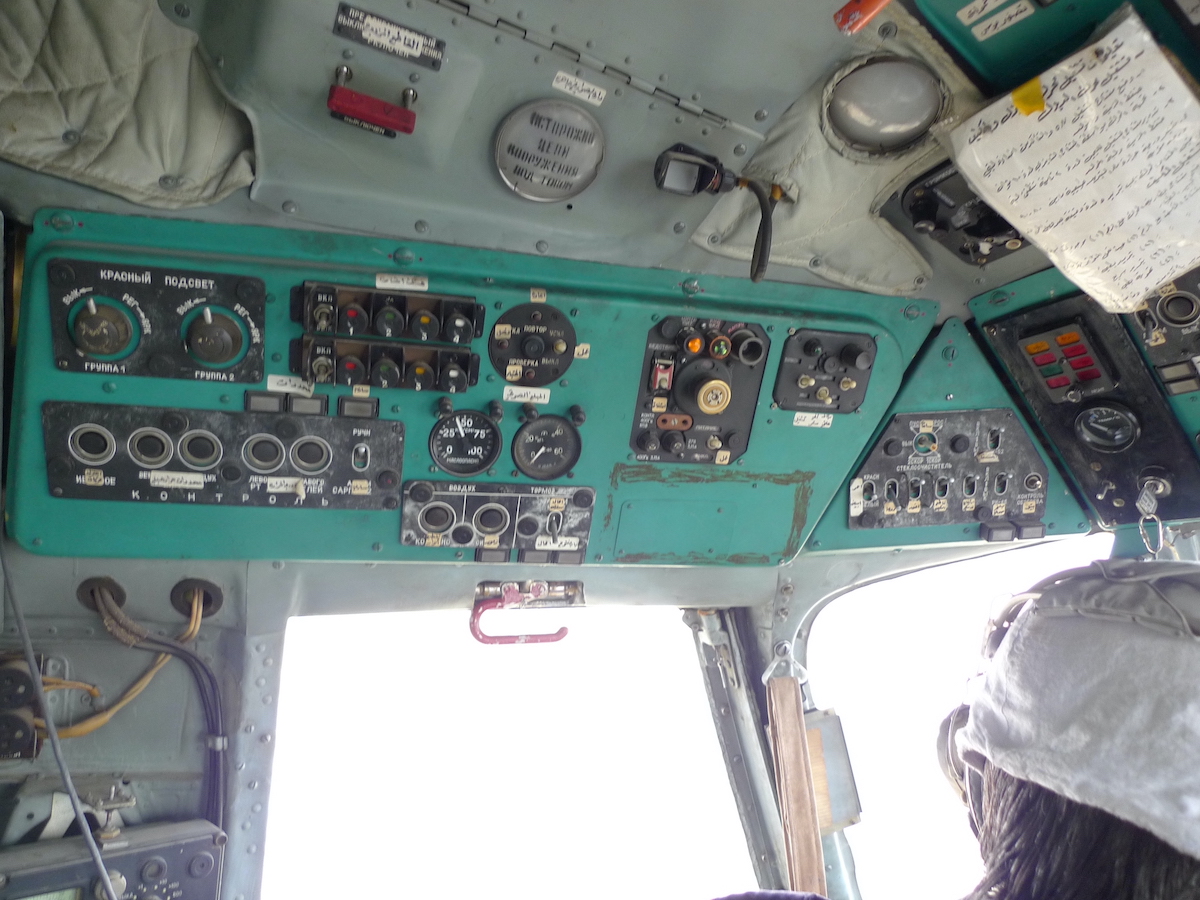 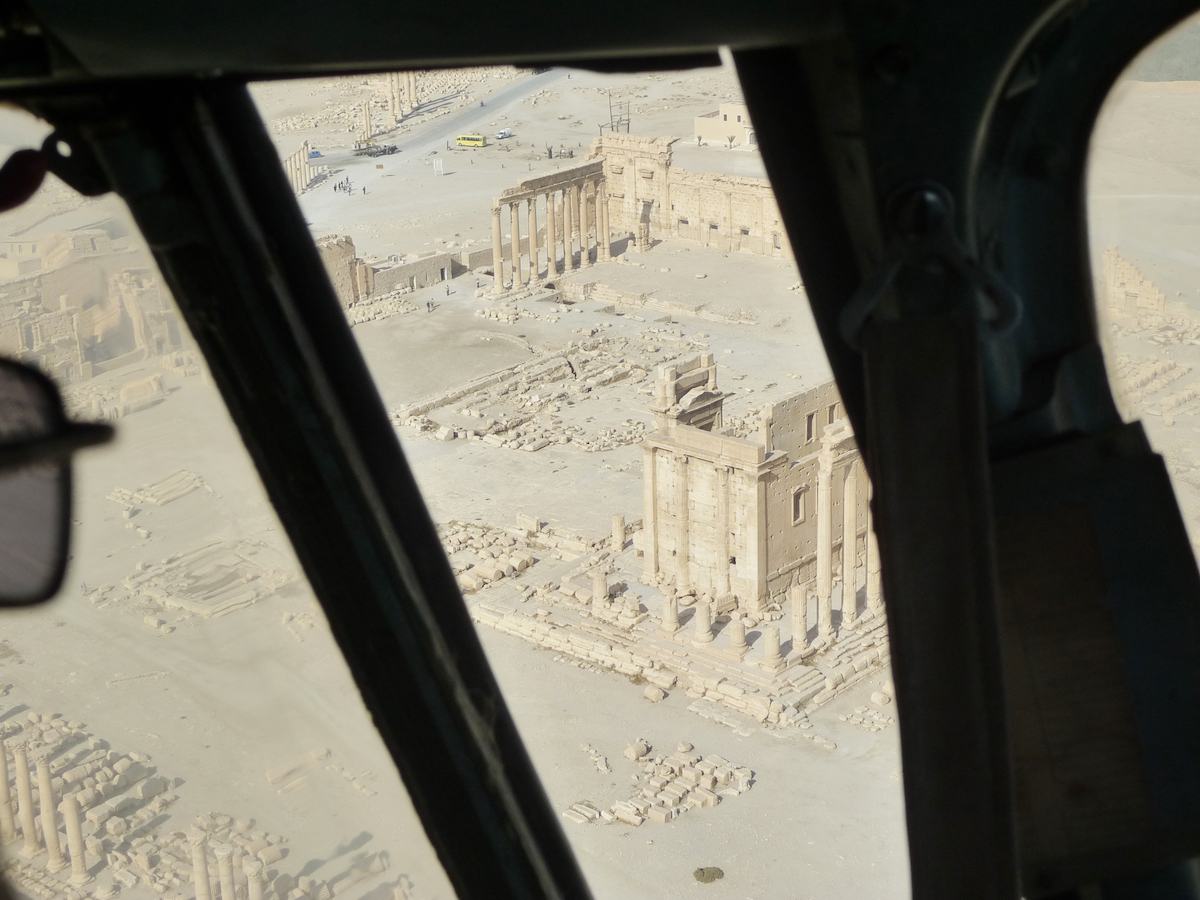 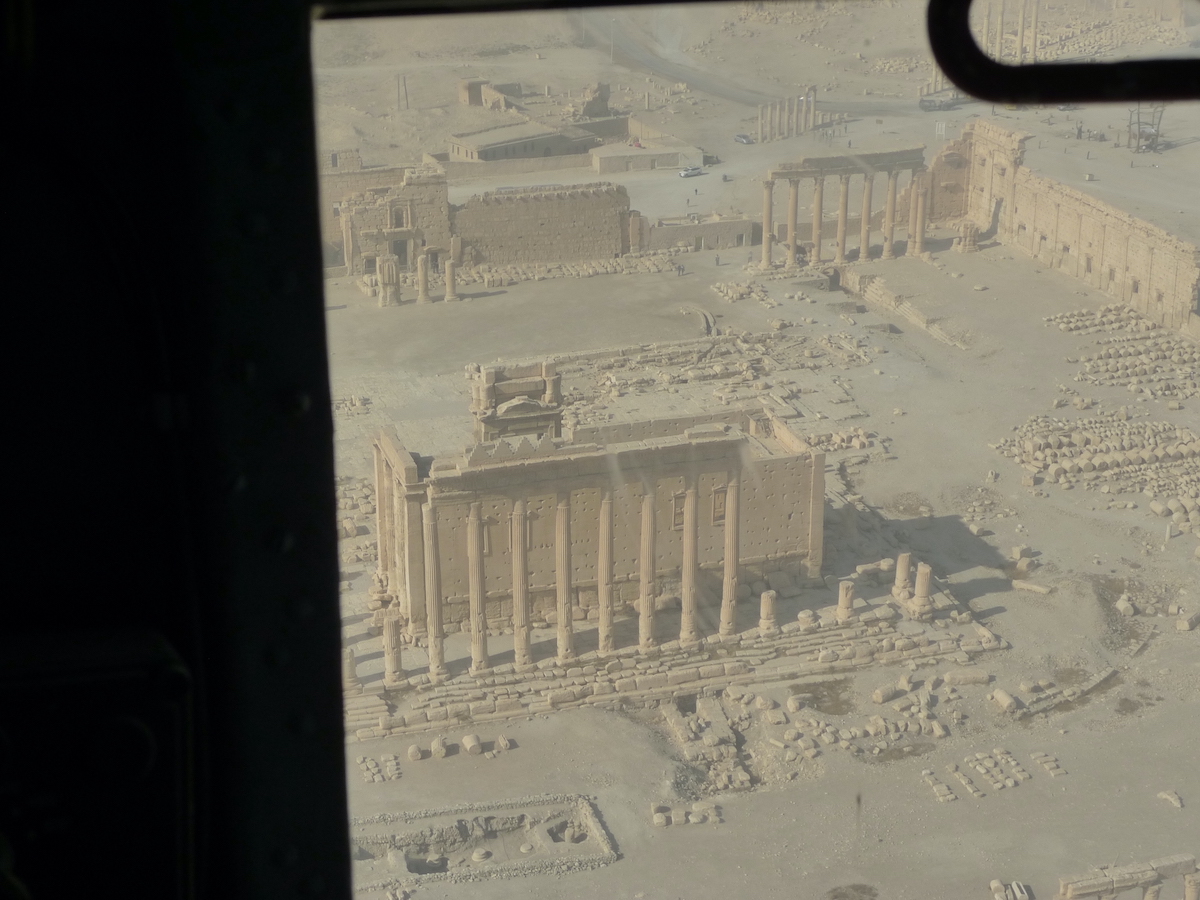 Clearly these warhorses were made in the USSR... their entire interior is covered in Cyrillic script… Each switch, clock, indicator is tagged in Russian, a language probably not known by the crew that will fly us to the center of this vast country. In a seemingly random pattern, about a third of the labels are covered in handwritten Arabic, sellotaped years ago.

Abruptly, the chopper takes off in a massive cloud of sand and dirt – when the dust settles we realize that we are not alone on this flight – two other machines follow from behind… We fly low over the capital, casting fast moving shadows over the carpet of grey urban substance, punctured by thousands of courtyards… Now we rattle over patches of indistinct urban brown and lavish agricultural green.

The groundplane now becomes three-dimensional: green patches alternate with sandy curves. Then, you are scanning desert – wrong word to describe its intricate arrangement of nothingness and presence. Each incident – tree, farm, camel, rocket base, human shadow, 4 wheel drive – is single and separate, not part of a pattern or context. Like an architects’ career: an abstract plane on which random commissions appear – prison, HQ, parliament, farm, home, school, park, airport – appearing as sudden holes in the clouds. 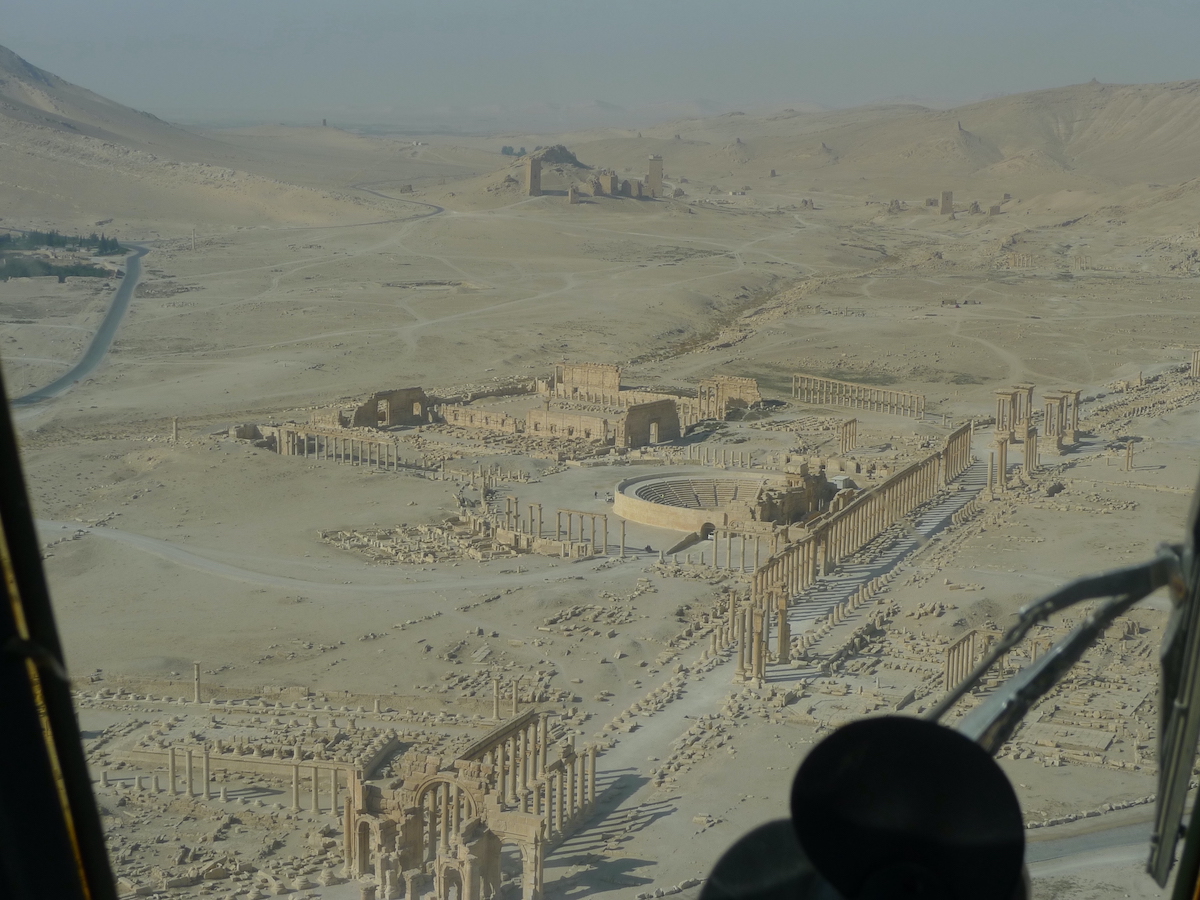 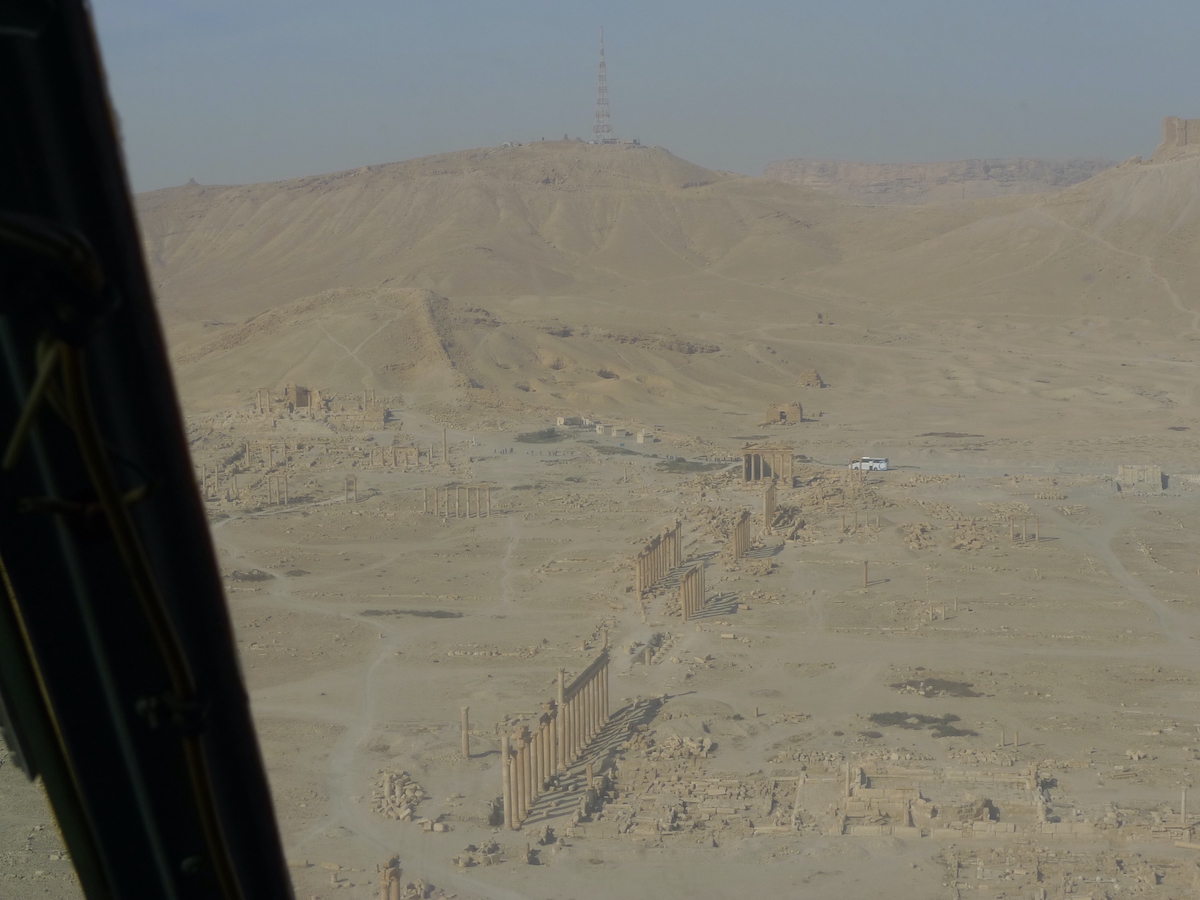 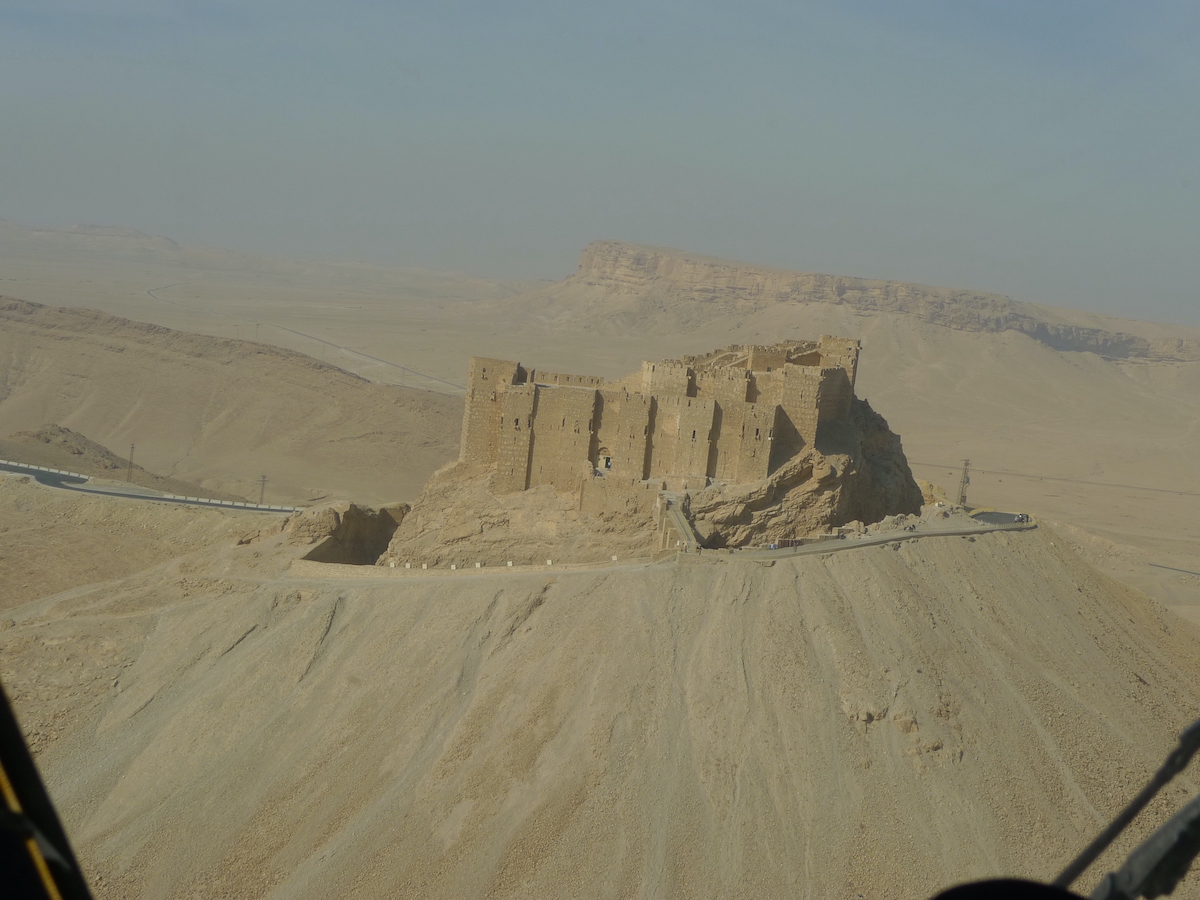 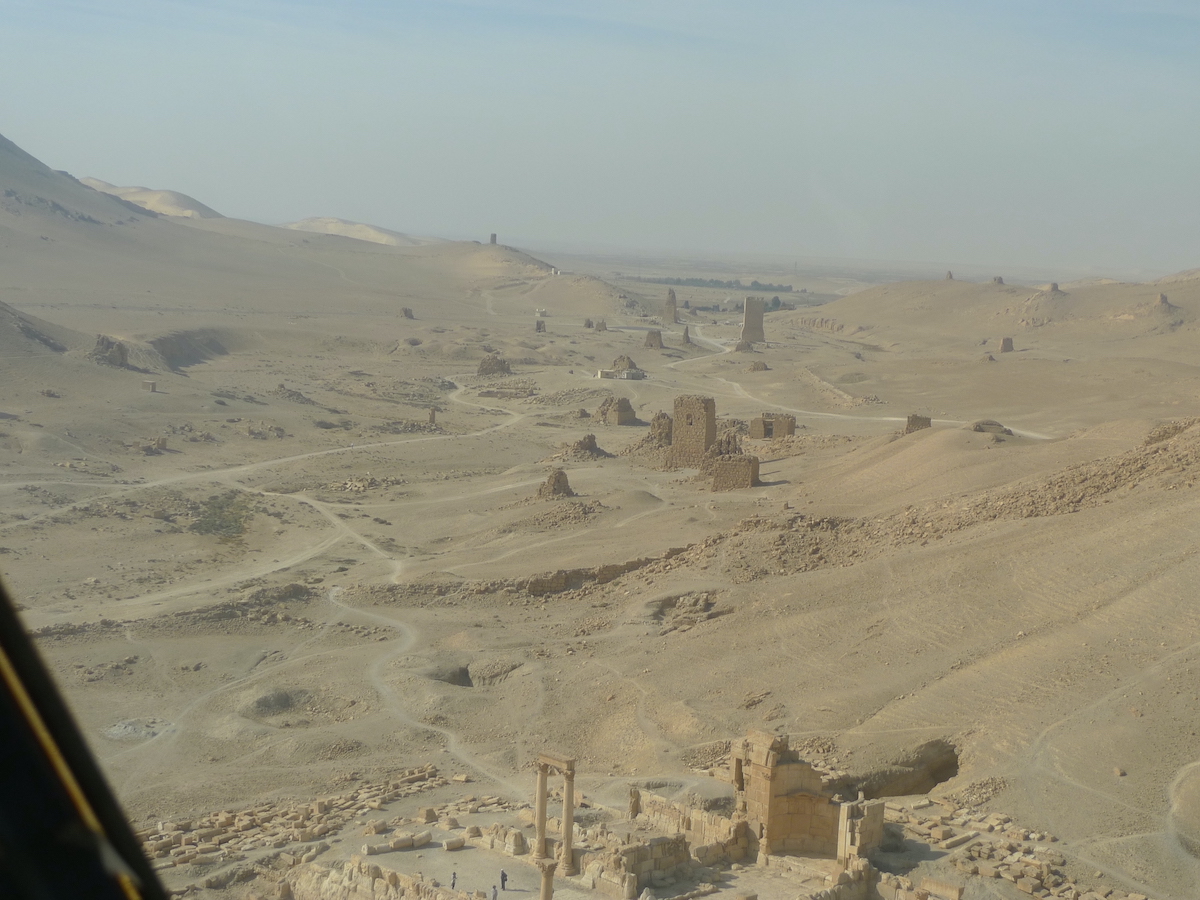 Your initial anxiety is diminishing slowly; at least the machines perform the task for which they are conceived, they stay in the air… All of sudden you stop, hovering like a giant colibri in front of a medieval fortress on a ochre cliff, archetypal like a child’s drawing… dating from the crusades? Fit for tourism? When did the world become something to look at instead of something to be part of? – then you follow a narrow valley planted with towers… a dusty forest of palms. Apparently, rulers from different countries have palaces here, to hunt.

Casually, we are dropped on the ground. Our destination, Palmyra…  What is most striking is that all objects – all vertical elements – have the exact same color as the ground – a rich golden yellow – as if sand solidified into « Roman » architecture on its own. The Ruin feels like the ideal, definitive state. I don’t remember ever seeing a « reconstruction » of Palmyra – only images of its current state – the erasure by the soil of any detail is so compelling that no one wanted to, or could, imagine it intact again. A city intended as ruin? 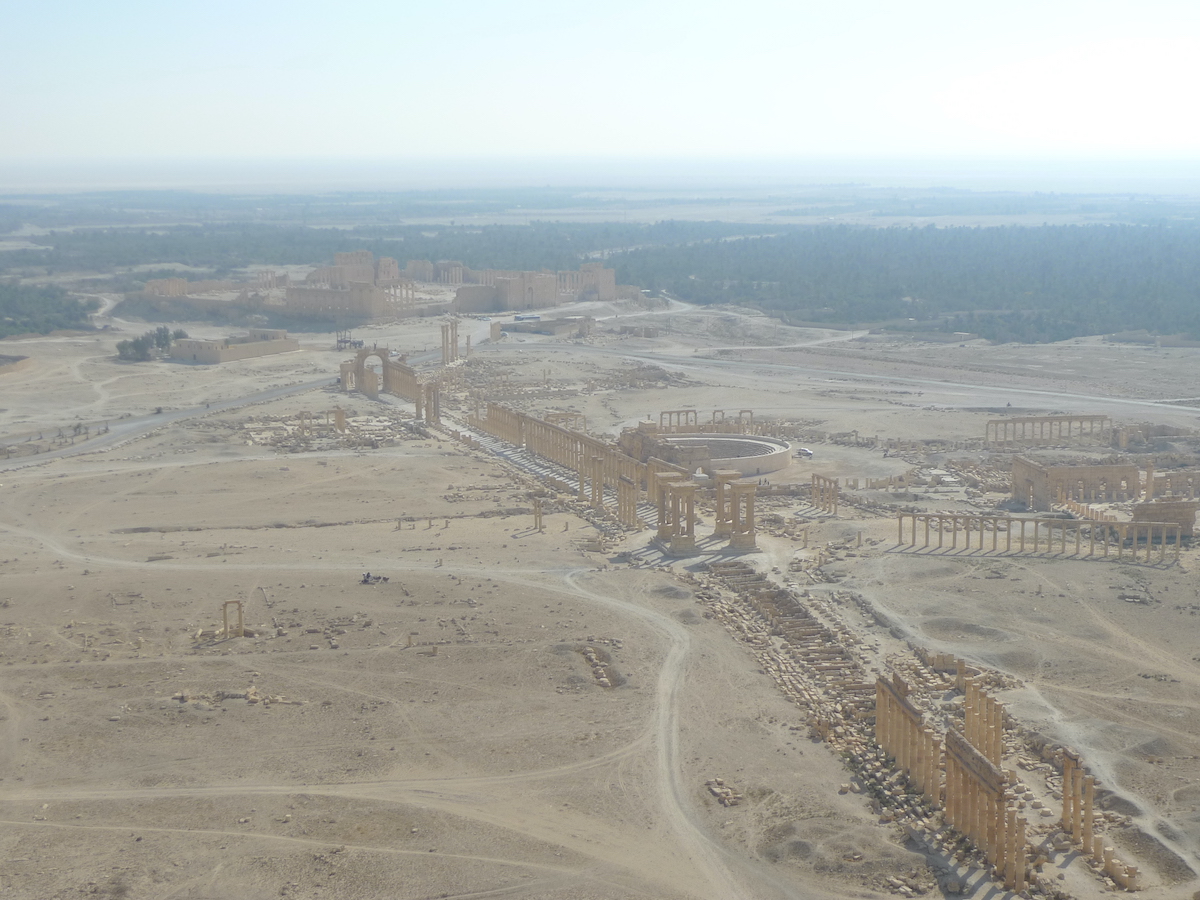 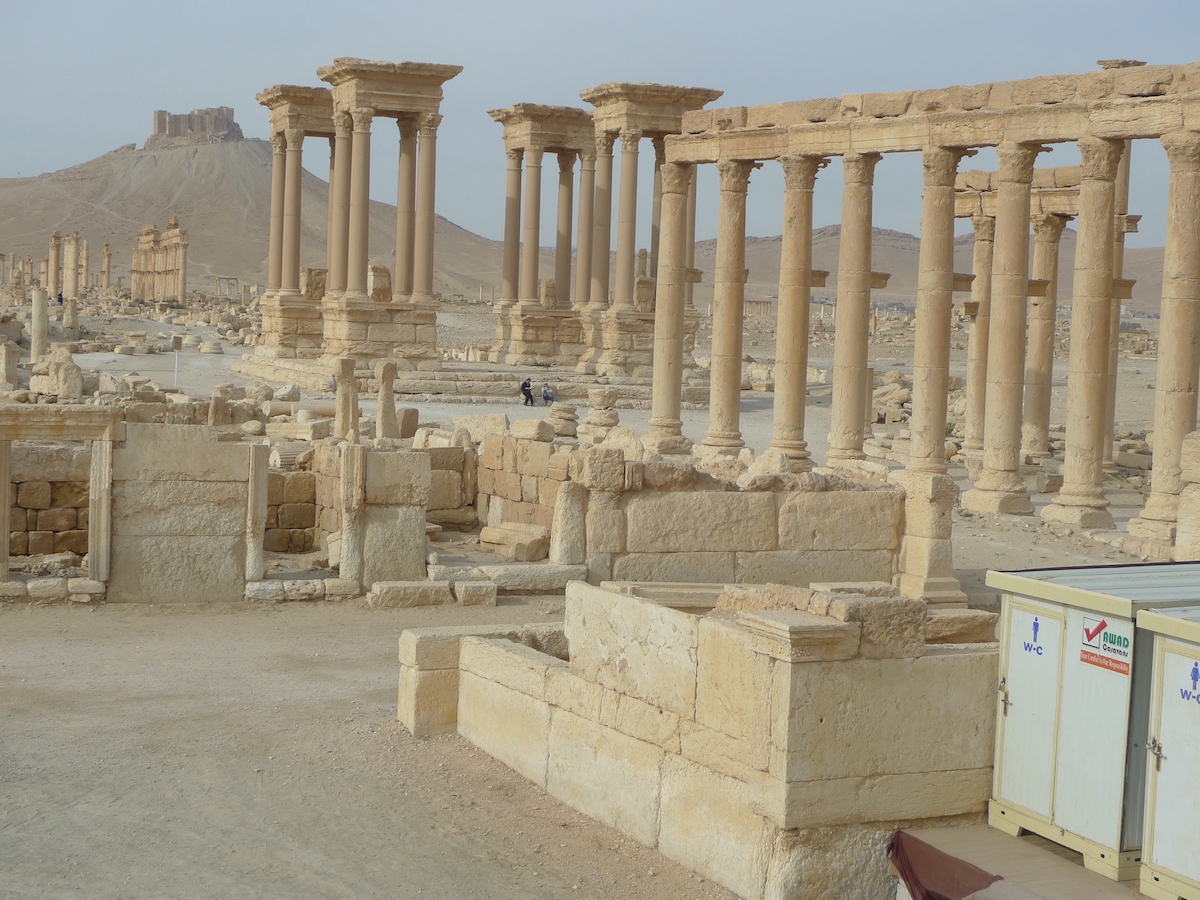 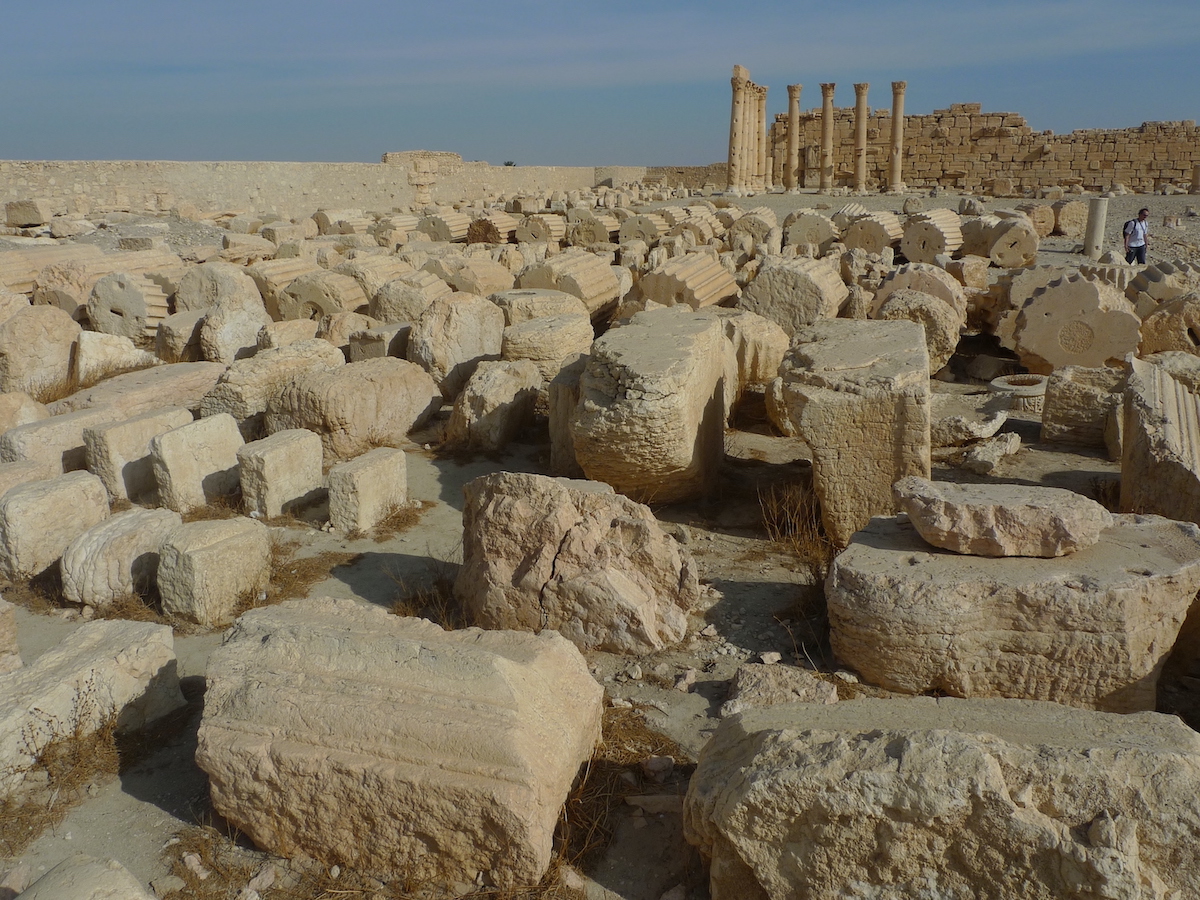 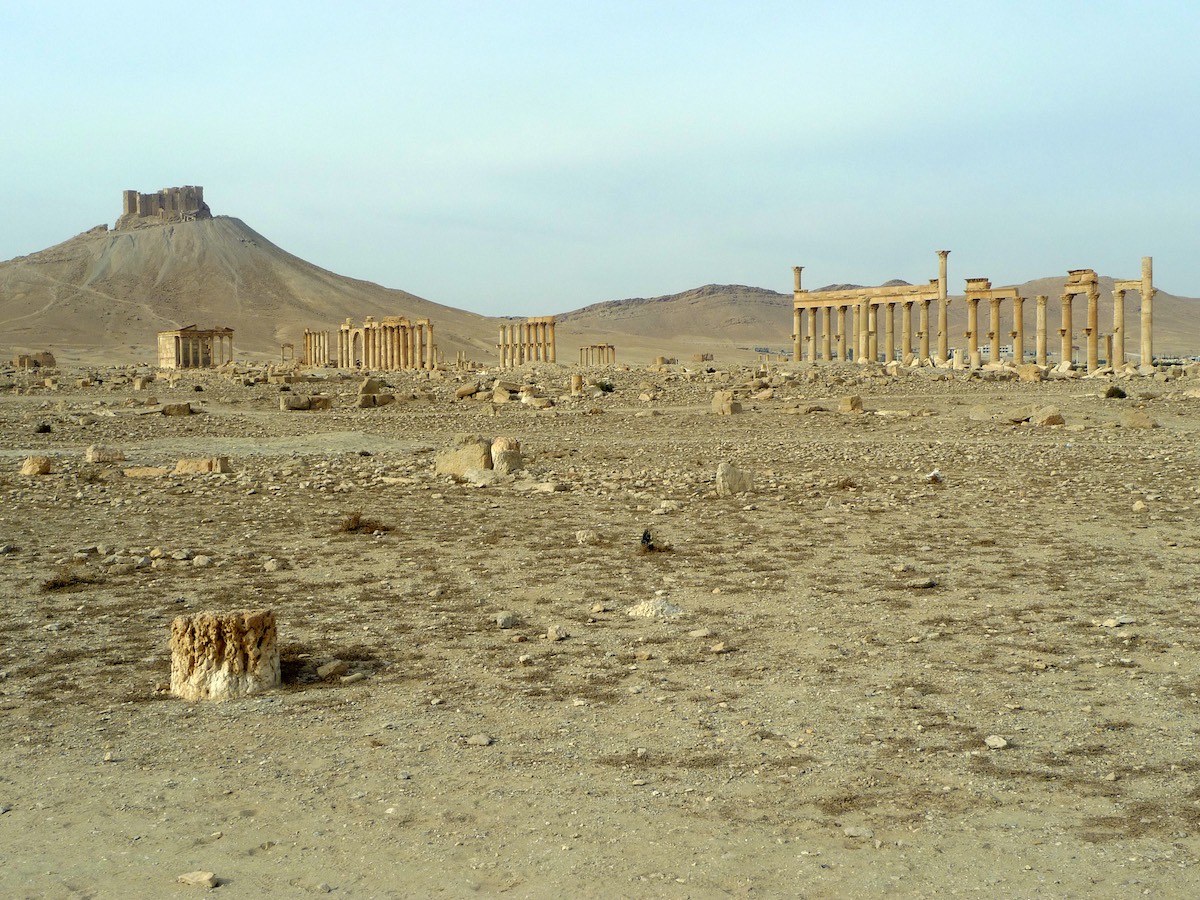 Inside the walls of the temple compound – reconstructed by the French in the 1930s under their Mandate (1920-1946) – the ground is covered by thousands of disks, sections of Roman columns – all in stone – arranged like a field of spare tires. Maybe Rome was a factory of prefabricated columns – wherever the sections were stacked and stabilized, there was Empire.

This is the Roman in its pure form. Why is it here? Historians and their diagrams explain it as an intersection of trade routes, one North South, the second East West… But isn’t any point the exact intersection of two axes? Or as part of the Silk Road. But the Silk Road is not a line, more a magnetic field between Europe and China. As an oasis between Venice and China; the only oasis that has spawned an ancient metropolis? All hypotheses fail to explain why there is a city here, still enormous in its ruined state, a sensational, inexplicable presence.

We walk along an endless colonnade – the stone slices reerected – that strings Rome’s generic typologies together, the Temple, the Baths, the Theatre... In between each moment, each patch, a miniature demonstration of smartness and beauty. 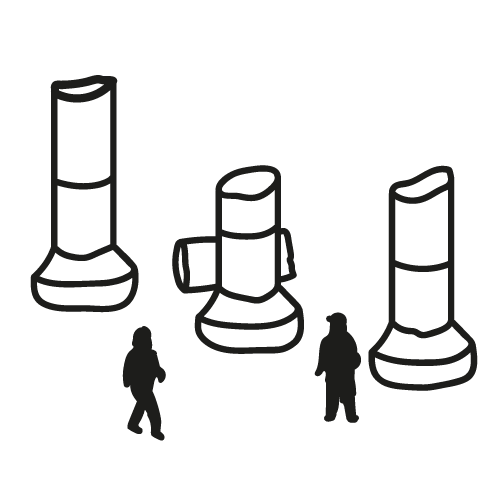 We focus obsessively on identity and uniqueness now. The Romans repeated a single repertoire in an endless range of different contexts – the mud of Holland, the sands of the Middle East… Repetition ceased to work in the 6th century, Byzantium, the early Middle Ages; they tried to resurrect the idea in the 20th century, but they failed. Since then, we are condemned to be original, forced, ad nauseam, to invent…

You are led into a nondescript meeting room in a nondescript house, a wooden table with modern chairs. You are meeting the main ; he is either very wise or very tired. It is impossible to know if his words are formulated to convey a specific message to you in particular – a hidden urgency perhaps – or if you are listening to the nth repetition of a well-rehearsed story that has been repeated for royalty, politicians, UNESCO supervisors, the ruin’s would-be preservers… He would like to protect the city better, but at the same time insists it should stay part of the real world, not be isolated. But that seems exactly what he has achieved, perhaps by not doing what is expected of him – this World Heritage is not gated, yet there are few visitors and barely any cars.

(Five years later, he will be decapitated by ISIS and hung from the tallest Roman column...)

It is time to go – blades are revving. We fly back West, over the « Valley of the Tombs », in the direction of the setting sun, over the towers, their long shadows spilled on the sand, seemingly liquid through the ondulations of nature… The towers are graves; they were inhabited by many corpses. For two centuries, they became taller, two, three, even four burial chambers stacked on top of each other. Did the city use its dead as proof of its vitality, to promote its brand? In the 2nd century the dead went underground again for reasons historians can’t explain; the towers still look curiously compelling.

Apparently, after killing the curator, they also took the towers down. Did they increase the awareness of the city by destroying it even further than history had managed on its own?

A letter to George Orwell. « All narrative is hypnotic. Some narratives are more hypnotic than others. Because of you, we can be conscious of the kinds and the workings of the narratives that set out to deaden us, lessen us, make us lie, make us part of the lie. »

German vice-chancellor Robert Habeck has more than twenty books to his name: fiction, drama, literary criticism, and non-fiction. It is tempting to read his fiction for glimpses of Green political futures, and his literary criticism for similar clues. How experimental can a literary politician be?

A logo might start as a designer’s whim. Only then does one look for meanings to fill it with. On Europas: mythic, artistic, fictional, political, psychological, satirical, and finally unfinished.